What this mod does

For landing on planets/moons without atmosphere:

Things that the mod handles

For closest-approach, the mod displays a "countdown" indicator. This is a little row of green dots, immediately below the estimated burn time. This row of dots counts down until it's time to start your burn: when the last dot disappears, start the burn.

The display is logarithmic. The last three (biggest, leftmost) dots are in seconds: 3, 2, 1, go. After the first three dots, it's 5 seconds, 10 seconds, 15 seconds, then it doubles for each dot after that.

Note: No countdown indicator is currently shown for the "time to impact" indicator; this is because "when should I start?" is more complex, depending on a lot of factors including your descent angle, TWR, etc. This feature may eventually be added, but until then, you're on your own.

If you don't like this indicator, you can customize its appearance, make it numeric rather than graphic, or turn it off completely (see "How to configure", below).

Normally, the mod displays estimated burn time like this (48 seconds in this example):

If the mod decides that you don't have enough dV to do the specified burn, it will display the time like this instead:

Note that it won't do this if you have the "infinite fuel" cheat turned on (since then you always have enough dV!)

Under the right circumstances, the mod will display a "time until impact" indicator (instead of "time until maneuver"), along with an estimated burn time which is how long your engine would need to kill your velocity at ground level. 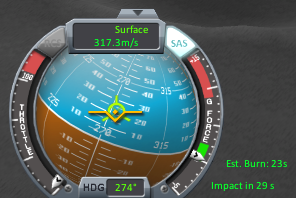 Note that the time-to-impact is based on the assumption that you don't do a retro-burn and just coast to your doom. So if you're figuring out "when do I start my retro-burn to land," you'll generally want to wait a little bit after the point at which time-to-impact equals estimated burn time.

Under the right circumstances, the mod will display a "time until closest approach" indicator (instead of "time until maneuver"), along with an estimated burn time to match velocity with the target. 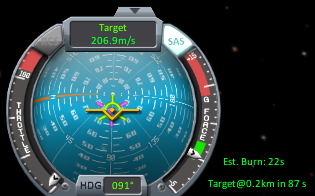 If you're imminently about to enter or exit atmosphere, it shows time remaining. 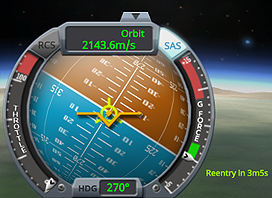 If you're in orbit, and you're reasonably close to being in synchronous orbit around the current celestial body, the mod will display a "geosynchrony tracker" that shows how close you are to perfect geosync. 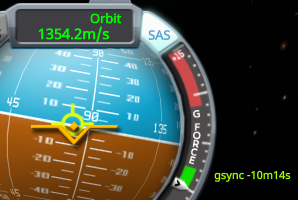 The tracker displays a time delta (positive or negative) showing how far off your current orbital period is from perfect geosynchrony. It shows hours/minutes/seconds until you get within 10 seconds, then switches to milliseconds display. (The transition point is configurable, see below.)

If you're in orbit and you have a target, then you get a "target synchrony" indicator, that works the same as the geosynchrony one, but shows time delta relative to target rather than relative to the celestial body's rotation period.

This makes it easy to put satellites in synchronous orbit. If the value is negative, thrust

. Goal is to get as close to zero as possible, for synchronous orbit.

In addition, this tracker also supports an "override key" that allows manually forcing it to display, even if the above conditions aren't met, as long as no other tracker is active. By default, the override key is the right Ctrl key (this can be changed via config). Also, by default, the override is only active while you're actually holding the key down; however, there's a config setting that lets you make it "sticky" (i.e. press once to turn on, press a second time to turn off).

See the "How to configure" section below for a list of these configuration settings.

SRBs display their burn time, in the following places: 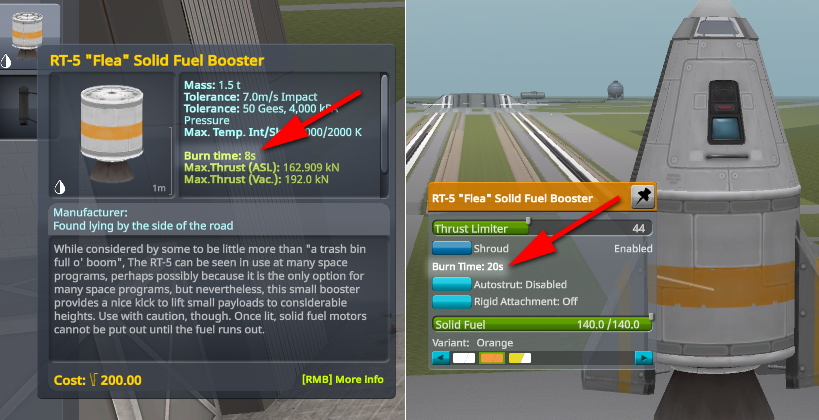 There's a reason this mod is called BetterBurnTime and not PerfectBurnTime. There are some conditions that it does not handle, as follows:

The mod bases its acceleration and dV estimates on your current configuration. It doesn't know about whether or when you're going to stage in the future.

Therefore, if you're going to be staging during the burn, this can cause a couple of inaccuracies:

The mod doesn't know what your fuel is going to do. It naively assumes that all fuel on the ship (that hasn't been turned off by disabling the tank) is available to all active engines. Therefore, there are a couple of situations it won't handle:

The mod assumes that any resources you have that don't have mass (e.g. electricity) are replenishable and therefore don't need to be tracked. Therefore, if you have an ion-powered craft and you're going to run out of electricity, the mod won't predict that. It will assume that you're going to have full electricity for the duration of the burn.

Time to impact is very simplistic

The calculations for determining when your ship will hit the surface are very simple. It looks at the elevation directly under the ship, and at your current vertical speed. It corrects for the acceleration of gravity, but nothing else. This means that if you're flying over rough terrain, the time-to-impact indicator will be irregular (it will suddenly get shorter when you're flying over an ascending slope, or longer when you're flying over a descending slope). If you're hurtling horizontally and about to smack into the side of a mountain range looming up in front of you, the mod has no clue. Be warned.

The mod does make a very rudimentary attempt to keep track of where the bottom of your ship is, so that impact time will be actual impact time and not when your probe core up top would hit. It's only a very rough approximation, though, so don't count on pinpoint accuracy at low speeds.

Important: The time-to-impact estimate takes into account your current velocity and the acceleration of gravity, and that's it. It deliberately does not take into account the acceleration of your engines, if you're firing them. It's an estimate of "how long would I take to smash into the ground if I turned off all my engines." So when you're retro-burning to land, the actual time to reach the ground will be longer than the displayed estimate, depending on things such as your TWR, throttle setting, angle of approach, etc. So if you want to time your burn so that you reach zero velocity right when you get to ground level, you'll need to wait a little bit past the point where the estimated time to impact equals the estimated burn time.

By default, this mod uses a "complex" calculation of burn time that takes into account that your acceleration will increase as you burn fuel mass. This is what allows the mod to produce accurate burn times.

There are certain circumstances in which the mod will drop down to a "simple" calculation that just assumes constant acceleration based on your current thrust and mass:

After the first time you run KSP with the mod installed, there will be a configuration file located at under this location in your KSP folder, which you can edit to adjust settings:

The following settings are supported:

The original impetus for this mod was actually something that no longer is part of the mod! Before KSP 1.5, the stock burn-time indicator for maneuver nodes was... suboptimal. It had a variety of shortcomings that made it less useful than it could have been.

BetterBurnTime was originally created to address those shortcomings and make the navball's burn-time indicator "just work better". That was the original purpose; that was originally the only thing that the mod did.

Over time, I added some additional handy functions-- the landing, rendezvous, and atmosphere-transition information.

Then, KSP 1.5 drastically improved the stock navball, and basically did all the improvements that BetterBurnTime was originally created to do. Yay! So that's stock now, which means I removed that functionality from BetterBurnTime after KSP 1.5.

However, the additional functions are still convenient, and still not in stock, so those remain-- and are now what BetterBurnTime is about, since its original purpose (maneuver nodes) has become moot.

If you're running a pre-1.5 version of KSP and want better navball functionality, you can run BetterBurnTime 1.6.1 and get the enhanced maneuver-node functionality.

Thanks to FullMetalMachinist in the KSP forums for the excellent suggestion of using a row of dots to show the countdown-to-start-burn! Ask and ye shall receive. Thanks also to Gen. Jack D. Ripper for usability suggestions that led me to the updated countdown design.

Fix a bug that causes the impact tracker to spew NullReferenceExceptions for an EVA kerbal.

Fix a bug in which an exception is displayed upon ship death.