How to use? What changes?

When you place a fuel tank in the VAB, there's a new "Fuel Type" button, which you can click to toggle among the fuel options. 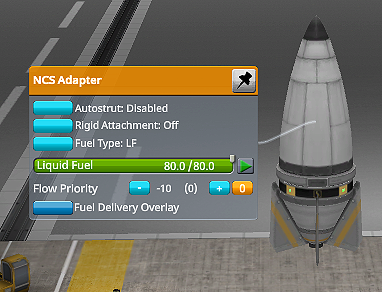 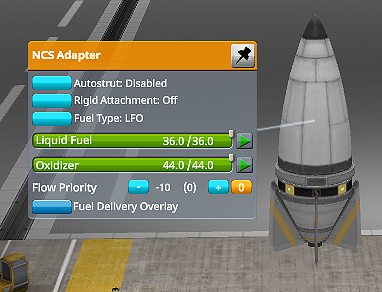 Click the button to pick the one you want. Then launch and fly your ship.

That's it. That's all there is to do.

Changes to the part info panel

Take a look at an LFO fuel tank's info panel in stock KSP. It looks like this: 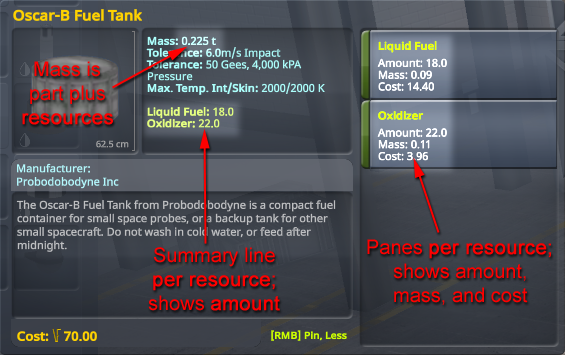 With SimpleFuelSwitch installed, it changes to look like this: 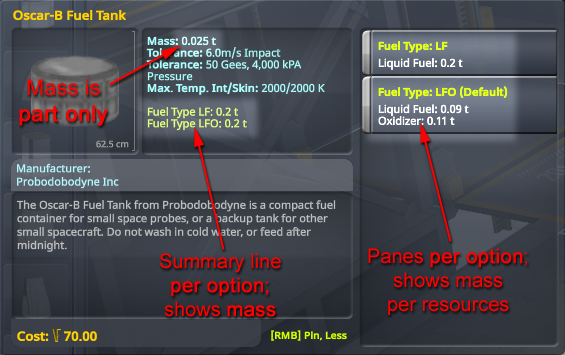 NOTE: If you'd prefer some other format for the resources display in these panels, you can customize it via config. See "Custom resource formatting" section below.

A few fuel tanks have been removed, now that this mod has made them redundant.

Rationale: With this mod, pretty much every stock LFO tank can be LF if you want, and vice versa. This means that there are some stock KSP tanks that are now completely superfluous-- i.e. there are a few cases where there are two stock tanks that are completely identical except for having one be LFO and the other be LF. With this mod in place, there's no longer any point to having such duplicates, so in the interest of removing part-tab clutter, these redundant parts have been removed.

(If you don't like that, you can just delete the Hide_redundant_parts.cfg file to restore them.)

Stock KSP has a glaring "hole" in its parts lineup: there aren't any good liquid-fuel tanks for rockets! Plenty of 'em for airplanes in the Mk2 and Mk3 sizes... but rockets get one itty-bitty 2-ton 1.25m tank, and that's it.

This mod aims to fix that hole by making it possible to just pick whichever fuel you want, simply and easily in the editor.

"But why would anyone want this mod, when there's already Interstellar Fuel Switch, which is so much fancier?"

Because Interstellar Fuel Switch is so much fancier, that's why.

Look, IFS is a great mod, been around for years, has had two-thirds of a million downloads just on SpaceDock alone. It's big, it's fancy, and clearly lots of people love it.

However... it's got a lot of stuff in there, such that I don't want to use it for my own gameplay. I like keeping KSP as simple as possible; I don't want to change gameplay mechanics in flight, I don't want to add new parts. Interstellar Fuel Switch does all kinds of stuff that I don't need or want (in-flight switching; very complex config options; many new tank models), and it also brings some dependencies along for the ride.

I want to keep my dependencies to a minimum; I don't need or want any new parts; I don't need fancy config options. All I want is a thing that lets me toggle stock tanks between LFO and LF in the editor, with no added dependencies, and this lets me do that.

So if you like Interstellar Fuel Switch and are using it already... then you don't need this mod. And that's fine.

But if you've been looking for a lightweight alternative to IFS, hopefully this mod may be more your speed.

SimpleFuelSwitch behavior is entirely driven by config files, so it's easy to add support to other parts, either directly in part config or via ModuleManager.

Instructions here for how to work with the config, or just look at the config installed with the mod. If you have any questions, please ask me!

Note: In addition to having the ability to add a "choose resource type" button to a part (such as what I've done to the stock fuel tanks in my config), the mod also supports a feature that allows you to use part variants to select resource types. Thus, for example, if you're producing a life support mod that has "Chips", "Soda", and "Pizza" as three new resource types... you could create a "Snacks Container" with different variants for those, and tie them together in config so that when you switch variants in the editor it would automatically configure it to the correct resource type. See the examples folder on the github repo for how to do this.

By default, SimpleFuelSwitch displays the resource amounts in the editor using mass only (unless it's a massless resource, then it shows units). However, if you prefer it to look different, the mod allows customizing the display via config (e.g. with a ModuleManager patch).

For details on the format specifiers, see comments in the SimpleFuelSwitch.cfg file that gets installed with the mod. There's also a sample config file in the github repo that shows how it's done.

DEPRECATED, DO NOT USE. This version introduces a bug; fixed in v1.2.