1) Displays Ap and Pe details on the main (Ship) screen

3) Provides Ascent Guidance for optimal launches, and other interesting data like MaxQ, kph, and mph

5) A goal of being as small and simple as possible, with no dependencies

When launching and approaching orbit, you might temporarily pass the apoapsis while circularizing your orbit, especially with low-thrust second stages that are common in the real world. When that happens, KSP wraps around the "Time to Apoapsis" and show Hours:Minutes:Second for the next Ap, so you lose information on how far ahead of Ap you currently are. This latest Telemetria upgrade will show the "Time Past Apoapsis" data with a negative number, making it obvious that Ap is behind you so it's easier to adjust your ascent. 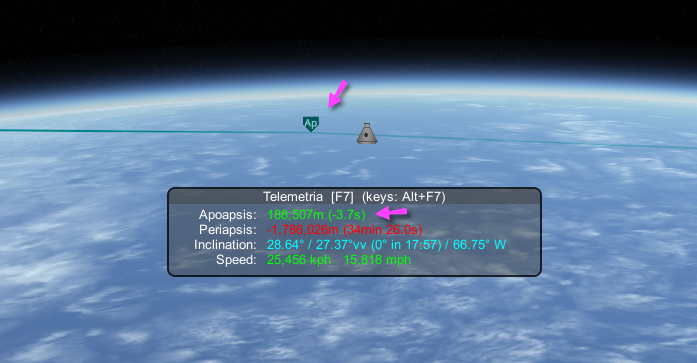 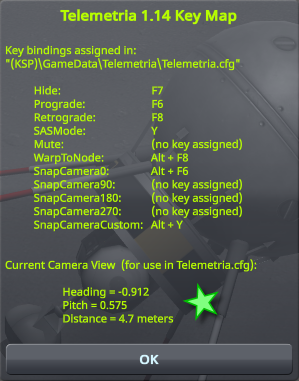 So you're launching a glorious new rocket, and you have to constantly flip between the Map view and Ship view, so you can track the Apoapsis and Periapsis during ascent. I'd rather watch my rocket and epic staging events than a parabola line. Even worse, right-click the Apoapsis to keep the data visible > then switch back to Ship view > switch back to Map view and poof the data is gone again. Update: As of KSP 1.7+, the Ap/Pe display is included in stock Kerbal, plus the data stays visible, BUT Telemetria's display seems much easier to read and is moveable.

As you probably know, mods like Kerbal Engineer (KER), MechJeb, and BasicOrbit can already show this information and a lot more, but I wanted something minimalist and simpler. Preferably, a single file plug-in (with minimum-to-no dependencies), and a basic .cfg text file that I can easily edit for changes. Using this mod, I can get perfectly circular orbits every time, and at the precise desired altitude, all without ever needing to go into Map view. It's very satisfying to reach a perfect orbit by hand-flying with this tool.

During the ascent, there are numerous changes typically made with SAS relating to switching pointing reference -- Surface while low, and Orbit when higher. In the stock configuration, this requires mouse moves/clicks to activate. To facilitate SAS changes, this mod lets you map keys for Prograde and Retrograde pointing, and also key toggling for the SAS Mode ("Current Plane of Reference"), between SAS: Surface and SAS: Orbit.

Since we're mapping commands here, we've all had the experience of trying to click the (nearly hidden) dotted brown line so you can pick Warp to Next Maneuver. As you know, when the Maneuver trajectory is too close to the current trajectory, it's nearly impossible to right-click it with the mouse. With this mod, you can assign the Warp To Node command to any unused key. Even better, you can set the time allowance to be anything you want, instead of the default 60 seconds that exists in KSP version 1.5.1 and lower. Using this key command also sets the pointing to SAS:Maneuver, which is one less thing you have to click. If there is no Maneuver Node, then this will warp you to the next Apoapsis/Periapsis minus 30 seconds - great for orbital circularization!

To view the key bindings that are active with Telemetria, press the key combo mentioned in the title bar (Alt+F7 by default): 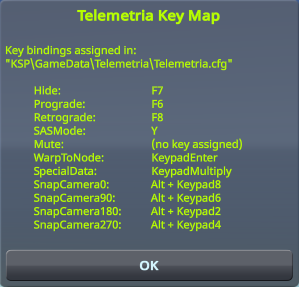 "Ascent Guidance" shows you the optimum pitch angle to steer while climbing to arrive at your desired altitude and angle. If you've played KSP for awhile, you probably already do this based on instinct, however this guidance can assist you with achieving a Kerbal Space Agency-approved launch trajectory resulting in a circular orbit with minimum fuel. The formula used for guidance was listed in this thread:

Ascent Guidance will be active if the following conditions are true: 1) You are launching from a location with an atmosphere (non-atmospheric launches do not need guidance, and should turn prograde immediately after rising above terrain height) 2) The vertical speed is currently higher than 20m/s 3) You are above the "Start Turn" altitude in the .cfg file

Feature: Latitude shows the current latitude degrees, plus time to the next 0° node (when you cross a plane of reference such as the equator, in other words the next Ascending (AN) or Descending (DN) node). The 0° transition happens twice per orbit. The "time to 0°" is helpful since it allows you to adjust your inclination at a celestial body using no other references. This means you don't need to do the trick of "put a probe orbiting at 0°" (or hyperedit the persistent.sfs file) to obtain a reference for inclination changes. Like most data that Telemetria provides, the current Latitude and time to AN/DN is not available on the stock KSP ship screen, but is critical for realistic orbital flight ops.

Feature: Inclination Indicator Added small indicators to show if you are heading up "^" or down "v" on inclination. Note that this is independent of current latitude; "going up" can be positive or negative latitude. This information helps you to know which way to point (Normal or Antinormal) for inclination changes when reaching the 0° transition.

Feature: Extra Data There was some additional information that is of interest during launches and other activities, such as "kph", "mph", Max Q, etc. Using this data, Telemetria can calculate "Max q", and also when the vehicle goes supersonic.

(Probably works with other versions, too.)

Everything about Telemetria is controlled by the settings (text) file "Telemetria.cfg". As of v0.4, you can even change the .cfg file entries while playing the game, and Telemetria tries to be intelligent about your new settings without requiring a KSP restart (it will reload changes during a scene or vessel switch). This allows you make changes based on new ships and launches, or alternate target orbits, without restarting.

You can delete the "Telemetria.cfg" file, and a canned template (default) settings file will be created for you.

Telemetria saves the (x,y) coordinates of its app window to the config file. This means the Telemetria window is persistent between KSP sessions. All the other settings are meant to be manually modified with a text editor like Notepad (I have no plans to make a special UI for this mod, and in KSP you quickly get skilled at modifying .cfg files).

(well actually nobody has asked any of these questions, but they seem like good questions)

1) Why is it named Telemetria

4) Will you add other commands for keyboard mapping?

5) If this functionality already exists in mods like KER and MechJeb, why did you create a new mod?