AngleCan SIMPLEX TechTree is a rework of the Stock Tech Tree.
Download (40.48 KiB)

Simplex Techtree is divided into five branches, each with two strands. 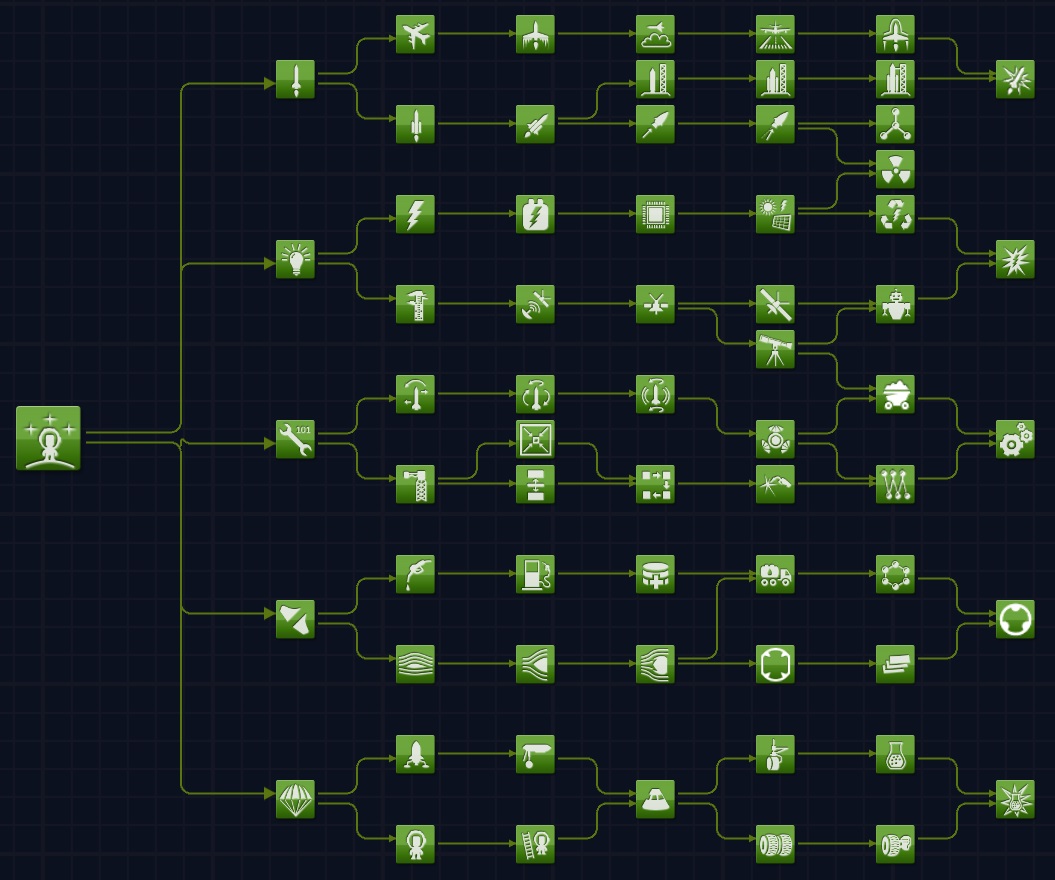 All nodes are based on Stock, and around half the parts have been moved for balance. Making History and Breaking Ground aresupported.

It is possible to play un-crewed before crewed!

This mod includes also includes a separate engine reconfigure to make it a little more difficult to launch from Kerbin (and any atmosphere). This cfg file that can be removed, keeping the TechTree intact (SIMPLEXEngines.cfg). The purpose of this minor reconfigure with engine parts is to make it more likely to need a two or three stage rocket to achieve orbit. Vacuum thrust and ISP have not been adjusted, so all craft designed for vacuum will not be affected.

Special nodes appear for upgrades such as in Kerbalism or SIMPLEX Propulsion.

Recommended Mods to play with:

KEI (for Science around the KSC)

To play with 50% science settings

Hotfix as I didn't add all the new kerbalism tanks...

Truly not released to maximise the number of 2s

SAVE BREAKING CHANGES DUE TO NEW NODE LAYOUT

Upgrades cfg * Every node has an upgrade, but these are hidden unless specified. Current support for Kerbalism, SIMPLEX Propulsion. * See the end of this cfg for more details.

PSA * this will continue to get support, however I am now working on an extension Tech Tree to better support life support, as well as the Near Future Suite, and eventually KSPIE - so this will be the last update before 2.0. * as mods are updated, I will continue to update this mod.

As always you can removed the engine nerf by deleting SimplexTreeEngines.cfg

PSA * this will continue to get support, however I am now working on an extension Tech Tree to better support life support, as well as the Near Future Suite, and eventually KSPIE - so this will be the last update before 2.0. * as mods are updated, I will continue to update this mod.

** Adjusted the Engine nerf to be a curve that is definitely below stock curve - I think it had been too steep replicating a soup o sphere.

As always you can removed the engine nerf by deleting SimplexTreeEngines.cfg

Effectively a hotfix becasue SIMPLEXResources and SIMPLEXLiving got accidentally added in 1.7.

This would have caused ISRU Ore fun for people (Resources) but issues for Scientists who would not have been able to reset ScienceJr and also Goo. Now resolved.

If you are updating from 1.7 for a current save it will affect resources (Ore). I recommend keeping the SIMPLEXResources folder in that case. Deleting SIMPLEXLiving will not affect anything but fix your problem with Scientists.

Updated for KSP 1.6, backwards compatible through to stock KSP 1.3.x

A couple of mods had some sets of parts hidden upon load. This is now resolved.

Added a note that Module Manager is required (not supplied)

Changed all cfg headings to include AngleCan Simplex byline: Seeing the coding among the stars

Moved parts in Stock and MakingHistory

Added in support for:

The Procedural Fairings is still a WIP but the parts are where they should be.

Update for 1.2 this will not adversly affect savegames