The Saturn Mobile Launcher from my Simple Overhaul project, made separate and configured to work with the Saturn V from Bluedog Design Bureau.
Download (3.40 MiB) 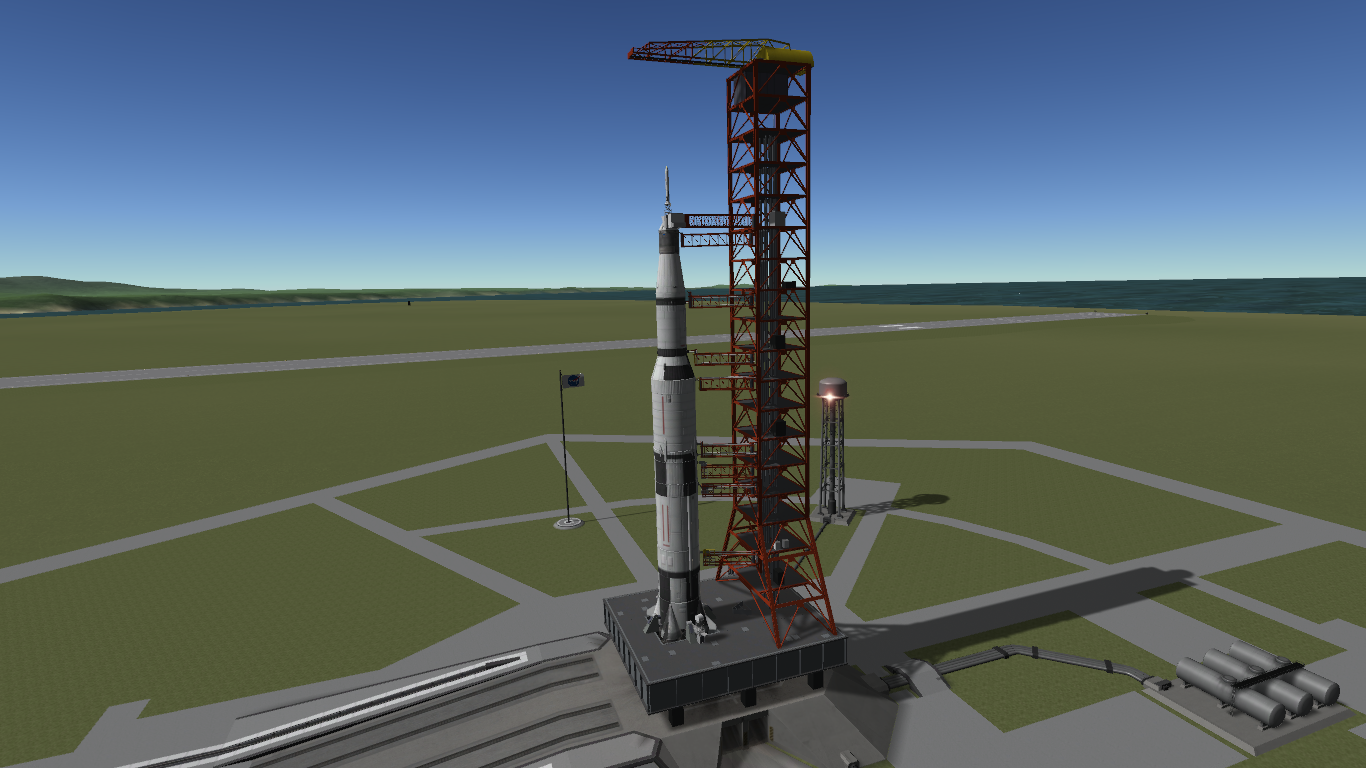 Because a Saturn V needs its ever-present companion, the Launch Umbilical Tower, I created a working replica of the Saturn Mobile Launcher.  It's not 100% exact, far from it, and has been simplified to eliminate detail that would be tedious to make without any real benefit.  It does fetaure retracting swing arms and tail service masts, pluswo working elevators to allow crew boarding of the command module from the ground.  There is also a hammerhead crane on top that can decouple and rotate using the Q and E (roll) keys.

This is the Saturn Mobile Launcher from my Simple Overhaul project, made standalone and configured to work with the default Saturn V from Bluedog Design Bureau.

The mobile launcher was designed for the Saturn V from my Simple Overhaaul, which is at 64% scale. It however works rather well with the BDB Saturn V, just needed a few tweaks and adjustments.

The BDB default-size Saturn V is at a smaller scale, and I didn't rescale the tower, so it's taller than the BDB Saturn V than the real one was.

NOTE: This mobile launcher is not meant to to be used with a real-scale Saturn V, as it would be way too big. Only Saturn Vs at 64% scale or a little smaller (like BDB's) will work properly. Now, real-scale versions of smaller rockets, like Falcon 9 or Atlas V, should work ok, if looking a bit weird.

Both the launcher base and tower include working elevators to allow crew access to the Command Module from the ground; the crew access swing arm has a walkway for crew boarding. The elevators, swing arms and tail service mast move/retract by an animation; the arms and tail service masts will need to be action-grouped with the launcher base decoupler for a Saturn V liftoff recreation.

The launcher can be used with other large rockets, provided they have a free attach node at the bottom of the first or core stage for connecting the launcher base. The tower and swing arms can be moved with the offet gizmo for fine-tuning the positioning.

NOTE: The mobile launcher parts were developed and tested with Kerbal Joint Reinforcement installed, so I recommend that KJR be installed if it isn't already in your KSP. I make no guarantees that these parts will work with the stock autostrutting. That being said, I did set the breakingForce and breakingTorque values of the launcher base to 500,000, and those of the tower to 250,000. That alone probably prevents any wobble, but why take chances?

Fixed folder structure...forgot to include the parent folder. Silly error :)