A set of cloned configuration files from stock jet engine parts that use oxidizer only, and a new resource configuration found hypothetically in Eve's atmosphere: "Explodium Vapour" evaporated from Eve's Explodium Sea. This vapour may also be present on other planets in popular planet packs.
Download (8.15 MiB)

Introducing Explodium Breathing Engines. A set of cloned configuration files from stock jet engine parts that use oxidizer only, and a new resource configuration found hypothetically in Eve's atmosphere: "Explodium Vapour" evaporated from Eve's Explodium Sea. This vapour may also be present on other planets in popular planet packs.

Engine balance is based on resource abundance and a pure ethane (C2H6) reaction with oxygen. There really is some science behind this that I explain at the project's Wiki. 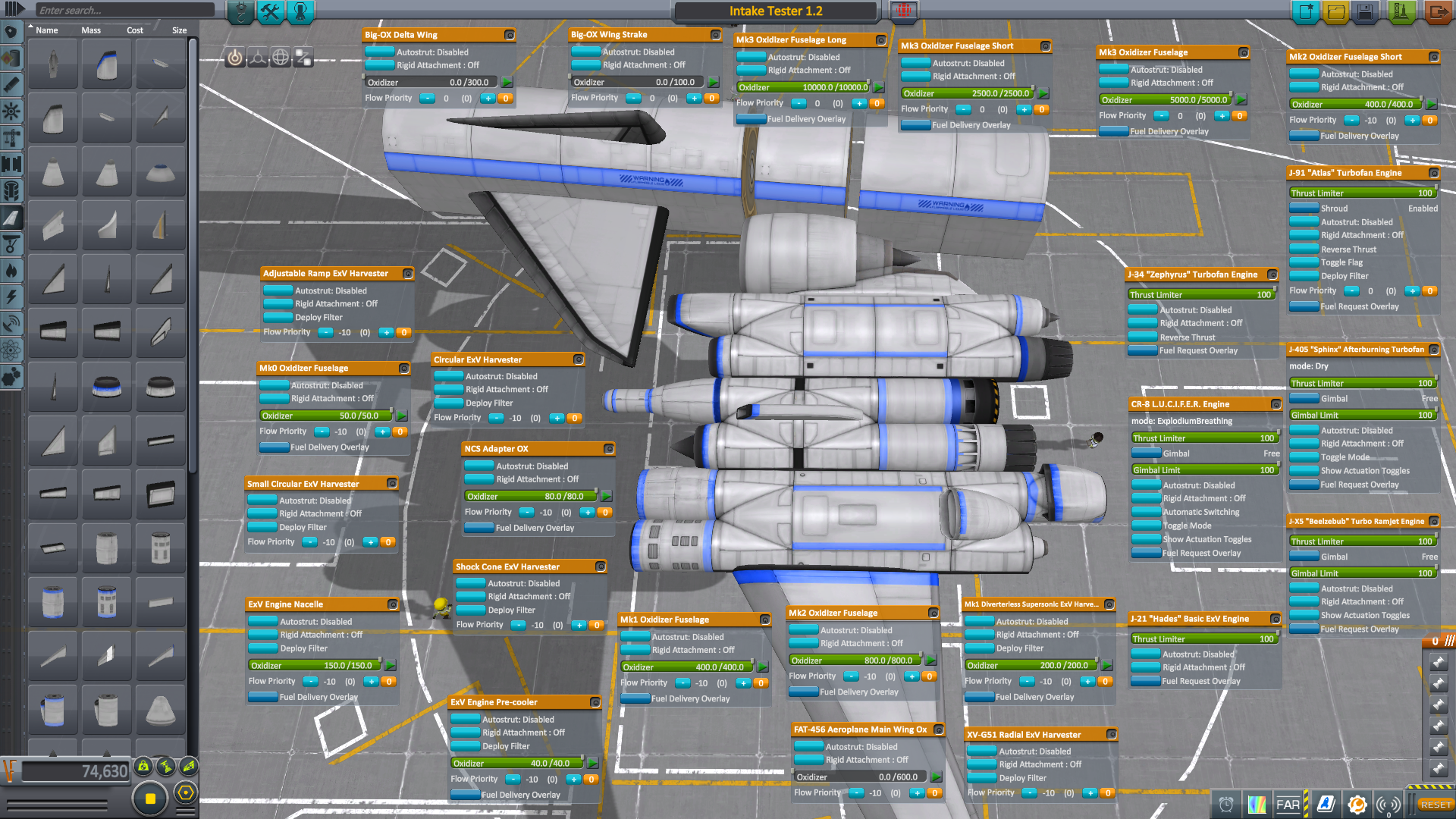 Quite a few folks helped jump-start me into modding for Kerbal Space Program. The list includes JadeOfMaar, DStaal, SpannerMonkey, wasml, ShotgunNinja, and even a few that don't realize they helped.

Updated for KSP 1.8.0; corrected a problem with NCS Adapter OX version. As a result, this may not work in earlier versions.

This release includes patches previously missing for wet wings and harvesters for Ferram Aerospace Research. This should fix the incorrect centre of lift indicator during craft construction. This works with both the official FAR release v0.15.9.1 on KSP 1.3.1, and an unofficial release v0.15.9.2 on KSP 1.4.3.

The changes are based on a side project that examined thrust amounts for Advanced Jet Engines on Galileo's Planet Pack's world Tellumo, which has IntakeAir for jet engines but densities in excess of twelve times that of Kerbin.

v0.2.0 Added colourized textures for the majority of these parts. Just used blue bands near connection points or along lines similar to the LFO tanks. Added copyright notice for modified textures; these belong to Squad / Deported B.V. and are used with permission per add-on posting rules part 8. (Not included in release) Added Module Manager FOR statements to prepare for RealPlume configurations. (Not included in release) Added RealPlume configurations using pre-existing models and textures. Cloned two jet engine plumes, then applied them to all engines.

v0.1.6 Further adjustments to harvesters and engines so resource abundance has an impact on engine performance. Changed engine plumes for Sphinx in wet mode, Beelzebub and L.U.C.I.F.E.R. in open-cycle mode to use Stock blue shock diamond. This matches an ethane-oxygen flame. Changed Eve's resource abundance to reflect KSP Wiki suggestion of 10% ethane.

v0.1.2: Converted all intakes into harvesters. Harvesters now only work on Eve! (Credit to JadeOfMaar: You're a lifesaver!) Added FAT-451 Airplane Wing with oxidizer tanks. Modified resource to have 1000% chance of appearing in Eve's atmosphere; should work with any difficulty setting. (Credit to ShotgunNinja for preventing a potential snipe hunt.)